Skip to content
December 29, 2018November 3, 2019 thebridgescollection Spotlight on Our Collection

The Female Figure – reading representations of women in the Bridges Collection

This week, Leah Neiman, a graduate student in the Museum and Gallery studies program, discusses the female figurines in the Bridges Collection, and what they can tell us about the female experience in antiquity.

One of the first questions we must ask ourselves about any artifacts is “where did they come from?” i.e. what context were they found in. This is a tricky issue for many artifacts which were collected in the past, without any records, as is the case with the Bridges Collection. However, based on similar material both in Cyprus, and female figurines from other ancient Mediterranean cultures, it is fair to speculate that these ladies found their final resting place in antiquity in a tomb. This does not mean their only function was in funerary ritual, they were likely objects used in daily life, which then followed their owners into the grave. The Bridges Collection has many terracotta figurines of women in a range of positions, predominantly from the Archaic period. The arms of many of these ladies are folded into their chests, and they hold either a pomegranate or pinecone were their hands meet in the center. Both of these objects were symbols of fertility in the ancient world because they have many seeds. The importance of reproduction to process of death is an idea that recurs in many ancient Mediterranean societies.  It suggests an understanding of death not as an end, but as the continuation of the cycle of birth and rebirth into an afterlife. 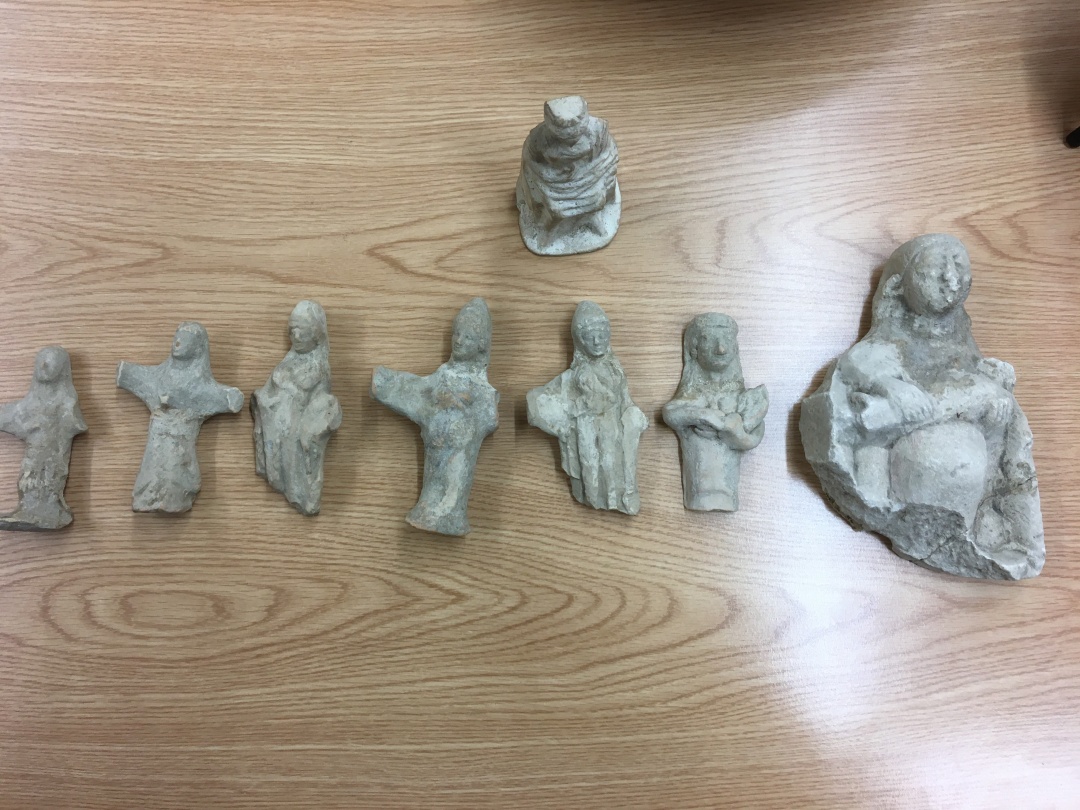 Eight of the female figurines in the Bridges Collection.

The flanges which extend out to the site of many of the figurines bodies indicates that they were not stand alone figures, but have been broken off of something larger. The curvature of their backs and the flanges also suggests that they faced inwards, likely around the rim of a vessel. There are complete vessels that preserve figures of around the top edge women, in a variety of poses, both inward and outward facing.

Female figurines engaged in activities on the necks of Hellenistic vessels. From Archaeological Museum in Nicosia.

HC2003(10) by The Bridges Collection on Sketchfab

Based on the size, style, and fabric of two of our ladies (HC1994.3(75) and HC1994.3(72)) they likely originate from around the rim of the same vessel. While the activities that the women are engaged in can vary from vessel to vessel, it always seems to be a consistent pose on the same object 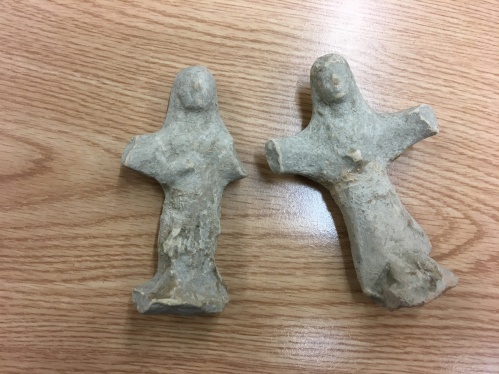 There is also number of figurines of a women nursing a child, a type refered to as κουροτρόφος, which references their role as child-rearers. These fall into a different category than the figurines discussed above, as identified by Orphanides (2001), as they are more active portrayals of women in daily life. Women likely would have breast fed children until about the age of two, and likely had children in quick succession. As one of our figurines shows (HC1994.2(54), the mother is already pregnant with another child, as she nurses the one in her arms. The exact ways in which these figurines were involved in daily life remain somewhat enigmatic, however, it seems clear that they reflect the kinds of tasks a women could expect to find herself doing. Κουροτρόφοι are the dominant type of figurine beginning in the Bronze Age, and the other kinds of activities other female figurines display, e.g. cooking, are those which would be compatible with childcare (Orphanides 2001).

The prominence of reproductive imagery and symbolism in the archaeological record attest to the importance of fertility to ancient cultures. Similar figurines of women with symbols or fertility and carrying infants can been found cross culturally and throughout time. It is our job to try to tease out as much information as we can from these objects to understand how people lived, and died, many millennia ago.

Check out our sketchfab gallery, here, and see how many ladies you can spot!