Most museums provide hands-on opportunities to learn about their collections through both educational programming and interactive displays. MUSA is no exception to this. The galleries have been designed to cater for a range of ‘learning styles’, whether this means visitors experimenting and solving problems themselves, listening to recordings, reading, discussing exhibits with each other, or absorbing visual information from charts, maps or graphs. By providing a range of learning experiences, we are more likely to engage our visitors and make the museum accessible to all. Or so the theory goes…

One of the exciting things about collaborating on the ‘Through A Glass Darkly’ project with the School of Classics is that it gives curators chance to test how well one method of interpretation works in comparison to another, when using the same selection of objects. The team agreed initially to compare the experience of viewing ancient Cypriot artefacts in a glass case with the experience of exploring the new 3D digitisations and handling the original artefacts. However, MUSA also has a ‘feely box’ in which mystery objects can be concealed, and it seemed an ideal opportunity to find out how visitors would respond to the Cypriot artefacts through the sense of touch alone.

In order to do this without risking damage to the originals we needed to make replicas of some of the pots. We approached George Young, a local potter, to find out if it was feasible, and he selected four items that were small enough to fit the spaces in the box and appealing for him to copy. These were: a Bronze Age spindle whorl, a Bronze Age red polished jug, a Hellenistic pinched oil lamp and an Iron Age white-painted perfume bottle. He made sketches in situ then the objects were carefully packed for loan to his studio, along with the corresponding catalogue records.

Our own documentation provided some insights into the original techniques employed by the Cypriot potters but the process of recreating them with modern clay and equipment proved very interesting. I was hugely impressed with the accuracy of the form and texture of the replicas George showed me after the first (bisque) firing. Although they were an identical size to the originals I immediately noticed they weighed more – perhaps because the modern clay was denser than the original Cypriot clay? George told me that simple features like the central hole on the spindle whorl had actually been very tricky to get right and had required several attempts. He also commented that the incised decoration had a regularity or rhythm about it that might result from creating the same pattern over and over on multiple pots.

Large numbers of pinched oil lamps like ours have been found at archaeological sites across the Mediterranean. They are wheel-made and mass-produced, and George confirmed that it was very quick and easy to make the lamp from a simple saucer shape. He also suggested that the uneven scraped texture on the base might result from the process of cutting the pot off the wheel.

The main challenge in reproducing archaeological artefacts was that George was not able to source clay to match the exact colours of the originals, and it was also going to be difficult to apply an authentic red slip to the jug. On this basis he suggested that we use modern materials to stain or paint the replicas, rather than employing authentic techniques. And so, with only a matter of days to go until our first focus group meeting, I found myself pulling out some acrylic paints and copying the original designs onto the perfume bottle, using our 3D model for reference! To get the burnished effect on the jug and the spindle whorl, the most successful technique was to use shoe polish, followed by some dilute air-drying clay rubbed into the grooves. Not the most typical of curatorial tasks, but needs must! 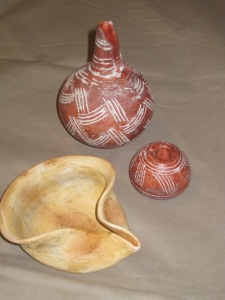 During the focus group sessions the responses to the feely box were some of the most polarized. Adults were generally reluctant to try it, whereas children dived in. Students of Archaeology and Anthropology, already familiar with handling original artefacts were most unimpressed by the thought of ‘fakes’, whereas the feely box generated great enthusiasm amongst Museum and Gallery Studies students! Once people got over the thought of sticking their hands into the box, the sorts of observations they made were more consistent, and much more in tune with the shape, weight, form and possible function of the objects.

In an ideal world, curators would offer unlimited handling of original artefacts, but we also have a duty to preserve the collections for future generations so sometimes it is more practical to provide replicas or ‘props’ to explore in the galleries. Our results show how much people value the chance to handle objects – whether original or not – in order to experience a sense of connection with the maker and appreciate the object’s function.